Most of us who have been diagnosed with cancer will be familiar with the war terminology that frequently accompanies a diagnosis. Fight, battle, war – they’re all words that get thrown around when you’re going through treatment or living with cancer. But are these words helpful? What do they really mean? In our latest blog, Sarah Carlin explains how she feels about this terminology and why she’s not ‘fighting’ her cancer.  We’d love to know what you think about the words that are used to describe a cancer experience – tweet us on @shinecancersupport or email us on info@shinecancersupport.co.uk. Happy reading!

JoJo Gingerhead, was a member of Shine who blogged prolifically about her experience of living with a secondary triple negative breast cancer diagnosis. I never knew Jo personally, but I admired her from afar, not least for her aim of “trying to find light in a dark and scary situation without using the words fight, battle, journey or survivor”.

Sarah and her Uncle Paul

The rhetoric around cancer was a bugbear of mine long before I received a diagnosis. I had a much-loved uncle who passed away from a brain tumour at the age of 28, and I’ve always been pretty sure it wasn’t because he didn’t fight hard enough. Yet it’s seemingly impossible to talk about cancer without using militaristic language.

Many organisations use this kind of language to get people on side. Reading slogans like “we’re coming to get you”, you’d be forgiven for thinking that cancer was some sort wildcard despot rather than a complex range of different diseases.

Cancer is not some sort of playground bully you just need to square up to, yet so many people seem to think it is. I’ve had someone tap their head and tell me not to worry because “it’s all up here”, as though all you need to do is stick on the Rocky theme tune and channel your own determination in order to stop those cells dividing. Something, I’ll wager, they’d never say to someone with COPD, or heart disease, or HIV.

There’s also the problem of confirmation bias. Many people who survive the disease talk about their determination not to die, so the idea that this somehow was a factor in their survival seeps into the public consciousness. But the will to live is a pretty much universal human characteristic. You obviously don’t hear from the people who were equally determined, but who died anyway because that’s how disease works.

Another issue is that nobody “wins” their battle against cancer, or certainly not in the way the media portrays it anyway.  Few people finish chemo, fist-bump the nurses and declare themselves triumphant. You crawl home and spend the next weeks, months, years sh*tting yourself that it’s going to come back. Often it does. If it doesn’t, then maybe, just maybe, after five years has elapsed you might tentatively feel like the danger has passed. There’s no VE day, no calling the troops home, no bunting. This is a disease in which you can never be wholly sure that the gruelling treatment you’ve just endured was enough. Sure, you may have vanquished the enemy on the frontline, but who knows if there are little metastatic guerrillas regrouping and waiting to re-launch when the time is right? My own initial brush with cancer was as close to a clear cut victory as anyone could get. Successful resection, no lymph node or vascular involvement, stage 1 – peace for our time. The bombs fell a year later, however, when it returned in not one but seven places.

Sometimes, the idea that I can fight my cancer through sheer force of will is seductive – I can completely understand why so many people choose that as a way of coping. The thought that you could die so young of this disease just seems like such an insult, so outrageous that the adrenaline runs through your veins and yes, you want to fight. As in most instances in which your life is in danger, the fight or flight instinct has kicked in.

But I know that I can’t fight my cancer. If I live, it won’t be because of anything I’ve done or felt. It will be because of a brilliant consultant, effective treatment and dumb good luck.

So whenever someone tells me I can fight it, it makes me wince – not just for me, but also on behalf of my uncle and on behalf of the many others who are no longer with us, like JoJo.

Sarah Carlin is 31 and works as freelance in PR and as a copywriter. You can read her other blog for Shine (about the perils of reading about cancer on the Internet) here. 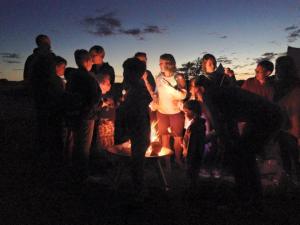 Marshmallows by the fire

Six years ago this summer, we ran our first Shine Camp.  We weren’t even officially registered as a charity but seventeen people came. It was a great time and we decided to do it again (and again). This year, for Shine Camp Number 6, we were lucky enough to get funding through the Aviva Community Matters programme. With the Aviva money burning a hole in our pocket, we got to work planning our biggest and best Shine Camp ever.

Between Friday, 7th August and Monday the 10th, we had more than 140 people join us on a field in Norden Farm.  Walking distance from Corfe Castle, the field is part of a larger campsite which means that there are showers and a lovely camp store nearby (along with a bunch of fun farm animals!).

We started Shine Camp because we like camping, but as it has grown we’ve also found that it’s a fun way to bring our Networks together and for young adults who are living with cancer to hang out in a different type of environment.

It took us AGES to get this photo. But it’s (almost) the whole gang.

There are no nurses, white walls or officious receptionists – just a big marquee, a nighttime campfire and, more often than not, a fair amount of Polish vodka (courtesy of our Polish friends Jack and Magda who make the trip down South every year).

This year we had people join us from across the country. For some, it was their first ever Shine event, for others this was their fifth or sixth camp in a row!

A number of our 2015 ‘Escapees’ also joined us for an informal reunion. 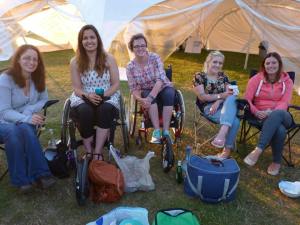 We try to keep Shine Camp informal, with only a few set activities – one of which is a big dinner on the Saturday night.  This year we had a hog roast and veggie BBQ followed by some mammoth cakes that the lovely Lucy from our Cardiff network drove down to Dorset.

Tired and smelling of woodsmoke, we finished camp on Monday and pretty much started planning Shine Camp 2016 the next day.  As it was our largest camp ever we had a fabulous time and also learned a lot (next year, we’ll bring more pancake mix!).  A huge thank you to everyone who came out, helped out, cleaned dishes, cooked breakfast, pitched tents – and had fun.  Can’t wait ’til next year!

We would like to send a special thank you to our friends at NC Insurance for nominating us for the Aviva fund and to all of those who voted for us in the competition.