Sarah Carlin (33) who has small bowel cancer and lives in Liverpool, explores how Shine members’ furry Florence Nightingales are helping them live better with cancer…

I’ve been dealing with cancer since 2013. It’s as about as much fun as it sounds.

During a particularly dark period recently, I realised that one of the few things capable of raising a genuine smile was my dog Elsie, a Cairns/Yorkie cross with about nine teeth and breath like the bottom of a fishing trawler.

I then remembered all the other times that pets had helped me through. Pre-diagnosis, when I would spend hours lying in bed, throwing up industrial amounts of green bile into a washing-up bowl, my mum’s cat Flo – who, it has to be said, would probably at that stage not have said hello to me in the street if she were human – would come to my bedroom and gently knead me with her little paws. When I was feeling better again, she’d get back to blanking me. During chemo, our family dog Bunk – a rescue Staffie cross who definitely missed his calling as a late 90s emo – would come up to my room and lay a heavy black paw on my stomach, as if to say “I understand”.

With a hunch that I wasn’t the only one being looked after by my pets in this way, I asked the Shine community about their own experiences with furry friends in Shine’s closed Facebook group. It quickly turned into a love-fest about all things on four legs, for the following reasons: 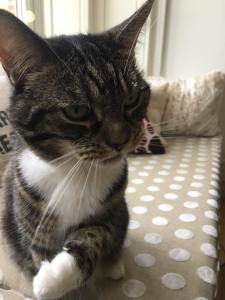 Owning a pet dog is like having a weird hybrid of a physical therapist, life coach and in-house dirty-protestor. Crippled by fatigue? So depressed you don’t want to get out of bed? Struggling after a big operation? They don’t want to hear it. They want you out of those PJs and taking them round the block, stat, or they won’t be responsible for the consequences. And they can’t promise that those consequences won’t be coming via their digestive system either. And even pets that don’t need to be walked – like cats and rabbits – need to be fed and watered.

The positive impact that this responsibility has can’t be 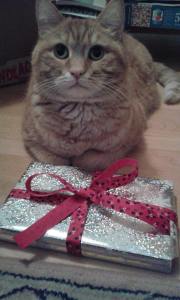 understated. One Shine member, Julie, remembered that her dog Izzy helped her recovery from an operation for bowel cancer by getting her active again just seven days after surgery. Fran, diagnosed with chronic myeloid leukaemia at 29, said her cat George was her “reason for getting out of bed every day, no matter how rubbish [she feels].” And Alison, who had treatment for breast cancer recalled that her cat SuzyQ gave her “a sense of purpose and unconditional companionship”.

2. You can share in their joy – without the complicated feelings

When you have cancer, especially as a younger person, you often feel disassociated from your peers. It’s great spending time with your friends, but sometimes it’s tough seeing the life you could have been living if the C-bomb hadn’t been dropped on you. You know, having babies, having hair, being able to get travel insurance without selling a kidney (which nobody would want to buy anyway, obvs) or just being able to plan something in three months’ time without factoring in worst-case-scenario scan results. Basically, whatever you’re doing, whoever you’re with, cancer is there in the background like a sinister ostinato, reminding you that life isn’t as you hoped it would be – something that can be really destructive to your relationships and your state of mind.

Your interactions with pets will carry no such baggage, however. You can truly be in the moment and share in their enthusiasm for life, whether that’s chasing a ball, trying to swallow a piece of cake whole or their absolute joy when you walk through the door after-surely-abandoning-them-forever (a.k.a. going to the shops for half an hour). You can share in their perfectly mundane triumphs with no complicated feelings. Unless, say, you had a real love for Chappie dog food but ate too much after a chemotherapy session once and now you’ve gone right off it. Or you used to love chasing mice but your oncologist has told you to knock it on the head because it’s an infection risk.

3. They bring the lols 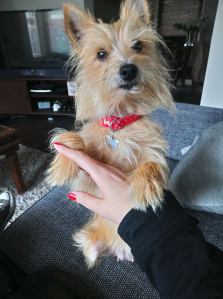 Elsie makes me laugh every day, whether through her world-class meerkat impression, her iron will or the fact that whenever we walk past the British Legion, she always, inexplicably, tries to go in (FFS Elsie, you’re barred!). And I’m not alone. Lisa, who has bone cancer, said her little dog Coco “brings a smile to my face every day…brings happiness and makes every day worth living.” And Christine, who has bowel cancer, said that her bunnies, Marigold and Juniper, “always make me smile even if I’m feeling awful.” 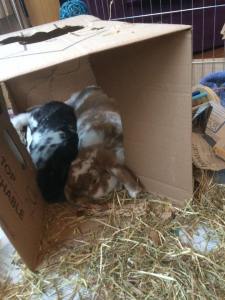 I was blown away by the number of people in our Facebook who shared stories of the TLC given to them by their pets. There were dogs trying to ease painful legs, horses sensing when their owner was having a bad day and amazingly, given the fact that they have reputation for being the haughtiest of the household pets, an awful lot of very caring cats who would be a real asset to the NHS.

Lyndsey, who has Hodgkin’s Lymphoma, remembered that her kitten, Stinky – who she adopted during treatment – would carefully settle into the crook of the arm that didn’t have a PICC line in it and purr her to sleep. Another Shiny, Jo, who has metastatic breast cancer said that her “Bichon baby” Pixie who “curls up with me in bed when I feel poorly and keeps the cuddles coming when I feel low” helps her cope with her situation.

5. Sometimes, it seems they can perform their very own PET scans (boom!)

One thing I wasn’t expecting when I put my post up was the number of people who had stories about their pet appearing to try to alert them to the fact they had cancer. Tracey remembered that her cat would always lie on the breast that had cancer pre-diagnosis. Anne’s dogs Buster and Lucky started to repeatedly snuggle into her left armpit, which prompted her to do a self-check and find a lump that was eventually diagnosed as aggressive triple negative breast cancer. And one of Danielle’s dogs kept digging on her leg so much that it prompted her to go to the doctor in case she had some sort of infection. It was actually a chondrosarcoma. That animals can sniff out cancer is actually a recognised phenomenon; some sharp-nosed pets are already being used to assess urine tests in the NHS. You can read more about the science behind it here.

We loved talking about our animals and I’m so glad that I – and so many other Shine members – have pets that are helping us through some very tough times. Here’s to a very furry Christmas and a yappy New Year!

PS We couldn’t fit all the pet photos that were submitted into this story. But they’re below if you want a quick look at the Shine Super Pets! 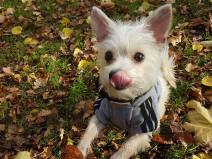 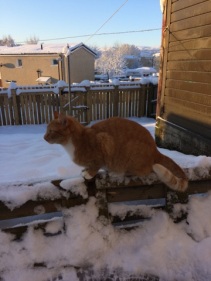 2 thoughts on “When the going gets ruff, the woofs get going: How pets help us to cope with cancer”